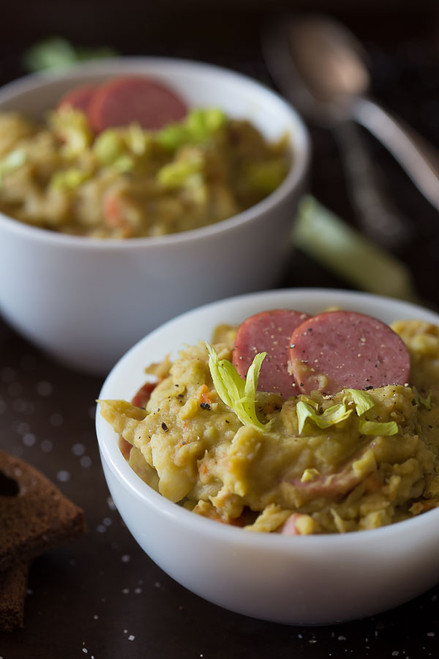 This Dutch split pea soup is packed full of meat and vegetables. It's a hearty stick to your ribs winter dish. Plus it's ready in just a couple hours.

In a large dutch oven add split peas and top with pork ribs, diced bacon, leeks, potato, carrot and celeriac. Pour 6 cups chicken stock over the mixture but do not stir.

Top the dutch oven with a lid and bring to a boil. Once it's boiling reduce the heat to a simmer and let simmer for 1 hour. You do not need to stir while the soup is simmering. Just keep an eye that it does not get dried out. It should be fine but if the liquid gets low just add more stock.

After an hour give the soup a good stir and add more stock if it looks too thick. Cover the soup back up and let simmer for another 30 minutes.

After 30 minutes remove the lid and pull out the ribs. Remove the bones from the ribs and discard. Shred or cube the meat and add back to the soup pot.

Add in sliced sausage, stir to combine and let the soup simmer with the lid removed for about 15 minutes until the soup is thick and the sausage is warmed through.

Season with kosher salt and pepper and serve topped with chopped celery leaves.

Note: It's normal for the soup to thicken as it cools. When you re-heat it's best to add a little water or stock to thin out the soup.

Peas with Prosciutto - (Free Recipe below)

EGG SALAD SANDWICH WITH BACON AND AVOCADO - (Free Recipe below)