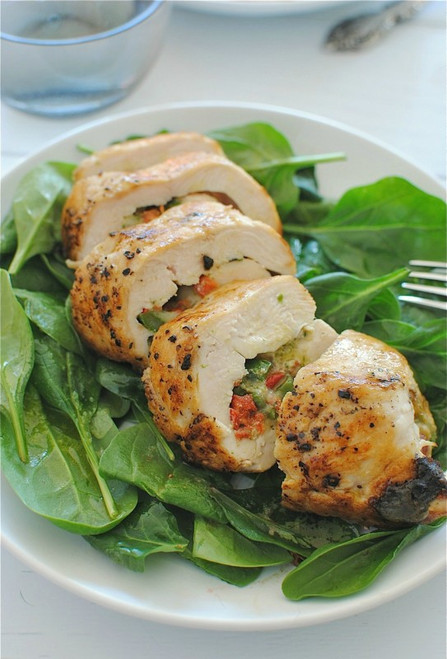 Bring a medium pot of water to a boil. Add the asparagus and boil for 1 minute. Immediately transfer to an ice bath to stop the cooking. Drain the water and dice the asparagus into small chunks.

In a small bowl, combine the diced pepper, asparagus, pesto and mozzarella cheese. Toss in a pinch of salt and pepper and stir to combine.

Now, place the chicken breasts between two large pieces of plastic wrap. Pound them out thinly until they’re as even as possible. Didn’t that feel good?

Divide the pepper mixture and dollop at one end of the chicken, and then roll her up! You don’t really need to toothpick them shut, but you can if they don’t want to hold. I just used my tongs to kind of keep them together when I was searing. Also, you might left over mixture, which is awesome. Throw it in a tortilla the next day and make a quick lunch quesadilla.

Heat the oil in a large skillet. Add the chicken rolls and gently sear on all sides until browned and lovely, about 7 minutes total. Make sure to season them as you roll. Because it’s how you roll. Sorry.

Then transfer the chicken to the oven and cook another 5 to 7 minutes, until the chicken is cooked through.

Remove from the oven and let the chicken sit for a couple of minutes. Then slice and serve over a bed of spinach leaves! You can wilt these too if you want.