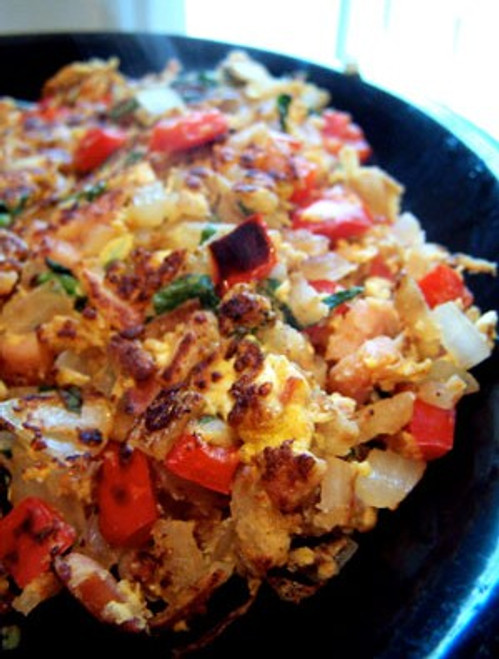 In the mood for a big Sunday breakfast and only having one egg can make you do funny funny things. ;~P

I fished out an old frozen bag of hash brown cut potatoes. Did you know they were just potatoes? I didn’t. I always thought frozen “hash browns” would be chock full of stuff I didn’t want to eat but on inspection of a few brands, some of them are just shredded potatoes with a preservative. But I digress.

Anyway, I took a cup of the frozen potatoes and used them as a base to make a hash style breakfast held together (kinda) by my one lonely egg. It was good, combining all the flavors of a traditional breakfast in a healthy hash style way!

Heat a small non-stick skillet over medium heat. Spray with cooking spray and add the frozen potatoes. Leave them alone while you chop all the other ingredients for at least 5 minutes before you flip. This will defrost and start to brown the potatoes.

Once they begin to brown cook for about another 3 minutes before adding the onion and bacon bits. We aren’t using any oil so they will not brown like traditional Hash Browns.

Once the onion and bacon bits are added continue to cook over medium heat until the onion softens. Add the Canadian bacon and bell pepper. Cook for a few minutes allowing the flavors to merge.

Add the chopped spinach and stir in. As soon as it starts to wilt, pour in the beaten egg. Immediately start to combine and mix in the egg. After the egg coats everything in the pan, use your spatula to press the hash down. It will create a nice brown on the bottom and “stick” the hash together a bit. Leave it alone for a minute.

Flip the skillet over on a plate and serve!

Potato Hash with Bell Peppers and Onions - (Free Recipe below)