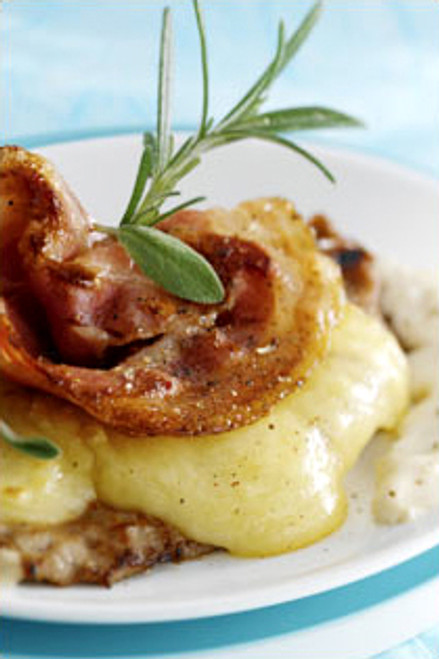 Preparation:
* Preheat the oven to 400°F for 10 min.
* Cut each veal cutlet in 2 along its length. In a frying pan, heat a small amount of oil and brown the cutlets. Cook each side for about 3 minutes. Season lightly with salt (because the pancetta is salty) and pepper. Put the unwashed pan aside.

Piccata:
* Grease an oven-safe dish and put in the 8 cutlets.
* Put a slice of Emmental on each cutlet and top with 2 slices of pancetta. Top each piccata with a sprig of rosemary and sprinkle with sage leaves.
* Put the dish into the preheated oven and bake 10 minutes or until the Emmental has melted and the pancetta is browned.

Sauce:
* While the piccata is in the oven, brown the chopped shallot in the frying pan used for the cutlets.
*Add the white wine, then pour in the cream and sprinkle with the grated cheese to bind the sauce.
*Let the cheese melt and the sauce thicken before pouring it over the piccata and serving.