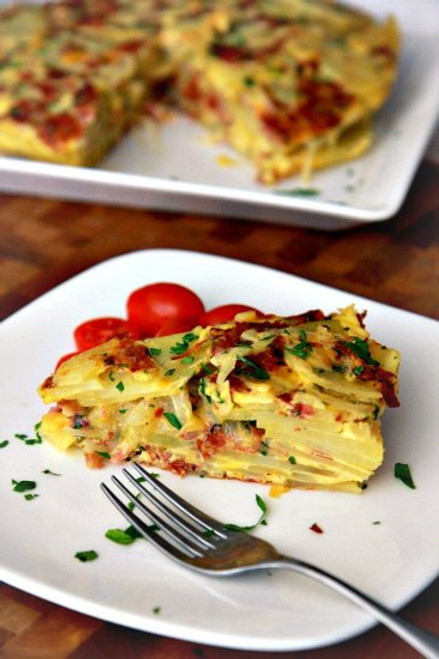 (adapted from Tapas by Pepita Aris)

Heat 1 tbs of olive oil in a non-stick frying pan,  fry salami until crispy.  Using thongs or slotted spoon transfer salami to a plate lined with paper towels to drain.

Add 1 tbs of olive oil to same pan. Add the potato mixture to the skillet. Cook the tortilla over a very low heat, until the egg begins to set.

Take a small spatula and lift the tortilla from the pan to help it from sticking and allowing uncooked egg to run underneath. Once the base of the tortilla has set, which should take about 5 minutes, place the tortilla under the broiler.

Broil the top of the tortilla until it has set and is golden. You will get some bubbling action on the potatoes.

Run a spatula around the edge and slide the tortilla out onto a plate.

Cut into wedges and garnish with chopped parsley.