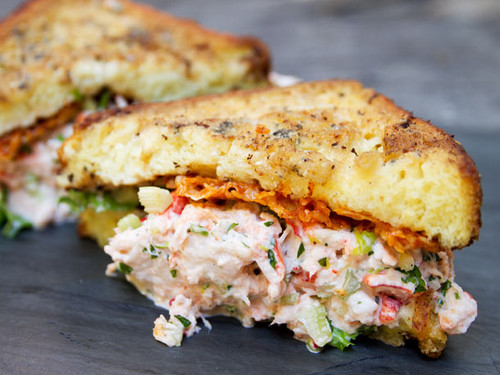 Here's A Sandwich a Day, our daily look at sandwiches around New York. Got a sandwich we should check out? Let us know. —The Mgmt.

The "Count of Stonington" starts with two thick pieces of eggy vanilla-honey french toast, then hits them with coarse sea salt. On comes a fistful of lobster salad, with small chunks of sweet, tender meat and a generous helping of mayo. The salad gets topped with a thick crisp of Grana Padano, a move that's less about balancing salty with sweet than punching you with it.

I can't say a Lobster French Toast (LFT?) is greater than the sum of its parts, but those parts are pretty well executed, amply portioned, and quite reasonably priced at under $10, tax included. Don't take the sandwich too far, as the bread sogs up fast, but do consider it if you want to take your lobster salad in a new, weird direction.