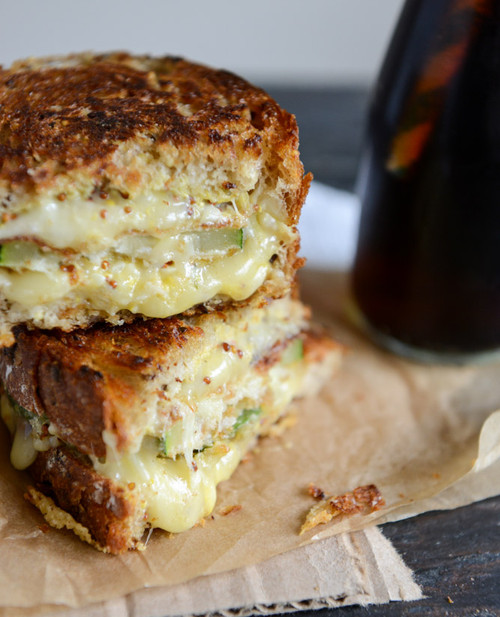 Prep the aioli first (recipe below).

In a bowl, whisk together the egg and egg white. In another bowl, whisk together the panko, breadcrumbs, flour, parmesan, salt, pepper and garlic powder. Heat a large skillet over medium heat and add olive oil. Dip each zucchini slice in the egg mixture to coat, then dredge through the breadcrumbs, pressing gently to adhere. Place in the skillet and cook until golden - about 2 minutes per side. When finished, remove the slices with kitchen tongs and let drain on a paper towel.

Spread one side of each bread slice with softened butter. Heat a skillet (I used the same one, just wiped out) over medium heat and place bread buttered-side down, then top with a spoonful of aioli, a handful of grated cheese, a few zucchini slices, more cheese, more aioli, and the second slice of bread, this time buttered-side up. Cook until cheese is melted and both sides are golden brown - at least 5 minutes per side. Lower the heat if the bread gets too brown. Serve immediately and dip any extra zucchini slices in the leftover aioli!

aioli Whisk together dijon mustard, egg yolk and lemon juice in a large bowl until combined. Slowly stream in olive oil while continuously whisking until the mixture emulsifies and comes together completely. Whisk in whole grain mustard and horseradish, then taste and season with a little salt and pepper as desired. Set aside.