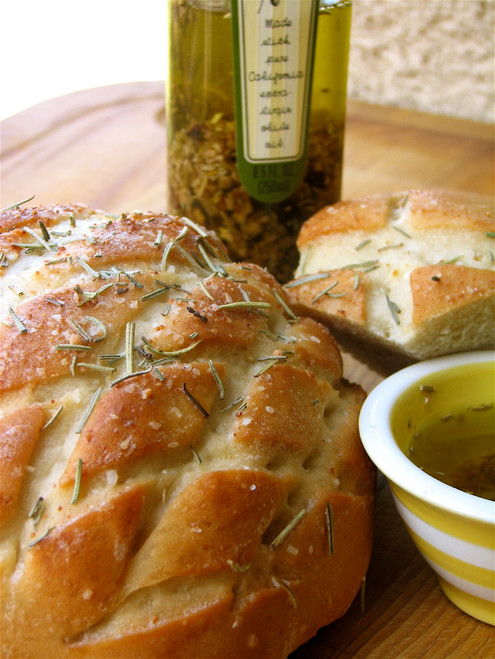 Directions
Put all ingredients but the flour into the mixer (KitchenAid) and let sit for a few minutes so, as Lindsey likes to say, "the yeast can do it's thing". Add the flour in small batches & mix with a dough hook for 8-10 minutes. Remove & place in a bowl that has been greased & let dough rise until double in size (about 30 min). Punch down & divide in half into 2 rounds and place on a greased cookie sheet. Cut decorative slits on top. Let dough rise again. Rub an egg white wash (1 egg white + 1 tbsp water) over the top and sprinkle with kosher salt. I added the dried rosemary & parmesan here. Bake at 400 degrees for 17-20 minutes (for me it took about 25 minutes).

*I used regular (non-rapid rise) yeast and so it took longer for the dough to rise- a few hours.
**You can also use wheat flour or do half & half.

I want to do a public service announcement on Kosher Salt, but I'll do that later. I feel very strongly about Kosher salt so I'll elaborate on that another time.

We went & bought some new trainers for Henry last night. His old ones were starting to get grungy so we got these but now he won't wear them. He keeps saying "old". He just wants to wear his old shoes. I don't blame him. They were pretty cool, too. I so wanted to get him these but was trying to be practical as he usually just has 1 pair of shoes at a time. I'll probably get these for the summer, though. A little guy most definitely needs sandals for the summer. Agreed?

You guys are so funny about the bowls! I bought them at some rinky dink discount store for like $4 a few months back. Think Big Lots, but not. It wasn't a chain or anything. All 3 of the bowls have the etching inside and then they also have a little pattern on the outside, too. Wish I could be of more help.