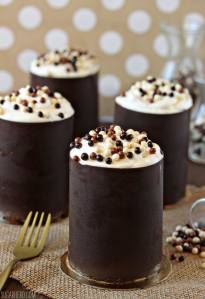 I have provided instructions for making this tiramisu either in glass cups or jars (the easy way) or encased in chocolate shells (the more complicated way.) Whichever presentation method you choose, I do recommend spreading the assembly out over the course of several days. Some of the components, like the banana bread and dulce de leche, will take time to bake and cool, and the assembled tiramisus will need to be refrigerated for at least 4 hours to set before eating them. In general this dessert does keep well for several days, but if you intend to serve them several days after assembling them, consider omitting the caramelized banana component to keep the dessert fresher longer.
Author: Elizabeth LaBau
Serves: 6
Ingredients
For the Banana Bread:
For the Dulce de Leche Soaking Syrup:
For the Caramelized Bananas:
For the Mascarpone Cream:
To Assemble:
For the Optional Chocolate Shell:
Instructions
To Make the Banana Bread:
To Make the Dulce de Leche Soaking Syrup:
To Make the Caramelized Bananas:
To Make the Mascarpone Cream:
To Assemble in Glass Cups:
To Assemble in Chocolate Shells: