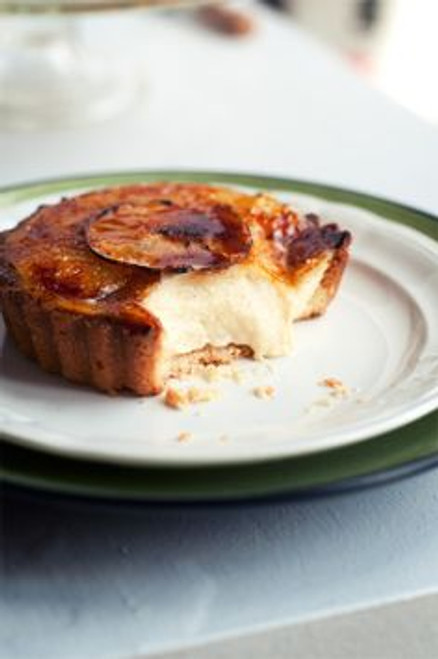 For the pear crisp
1. Preheat oven to 100°C.
2. Slice pear along its cross section and very finely slice with a mandolin. Transfer to baking tray and bake for 2-3 hours, checking occasionally, until pieces have dried out. Store in a sealed container until use.

For the pear crème pâtissière
1. Roughly chop pears and purée in a food processor. Push through a fine sieve.
2. In a separate bowl combine egg yolks, sugar and cornflour and whisk until combined.
3. Over medium heat place pear purée, cream and scraped, split vanilla bean and stir continuously. Heat until just beginning to boil. Slowly pour mixture into bowl of yolk mixture to temper then return to pan and heat. Again, whisk continuously until beginning to thicken, this should take a few minutes.
4. Decant into another bowl, remove vanilla bean husk and cover with plastic wrap until cool enough to touch. Gradually add cubed butter, whisking after each addition.
5. Return plastic wrap and place in fridge to cool completely.

For the pastry
1. Preheat oven to 180°C.
2. Combine flour, icing sugar and and salt in a food processor. Cube butter, add to mix and process once more. Add the cold water and once again process until mixture forms a ball. Remove, form into a disc, wrap in plastic and refrigerate for a few hours (or until cool if you’re in a hurry).
3. Roll out pastry, stamp out circles and prepare into tart greased tart tins. Fill with pastry weights (or rice, or beans) and bake for 15 minutes. Remove weights and bake for a further 15 minutes until browned and cooked through. Remove from tart tins and allow to cool completely on a wire rack.

For the assembly
1. Carefully spoon pear crème pâtissière into tart shells until just overflowing. Flatten with a palette knife and allow to cool and set in the fridge for at least a few hours. Once ready (the surface will have firmed up) sprinkle with an even layer of sugar and scorch with a kitchen blow-torch until toffee has formed. Place a pear crisp round in the centre, sprinkle with more sugar and again scorch with blow-torch until toasted and embedded. Serve immediately with additional pear crisps on the side.