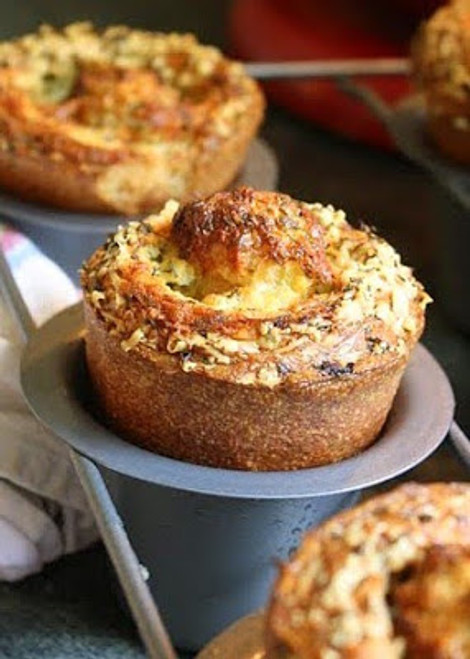 3 and 1/2 cups milk (I used 3 and 1/4 cups of  2% milk, and 1/4 cup of half and half,  since I didn't have any whole milk)
4 cups All-Purpose flour (I used unbleached)
1 and 1/2 tsp. kosher salt
1 tsp. baking powder
6 large eggs, at room temperature
1 and 1/2 cups grated parmesan cheese
2 Tbsp. dried mixed herbs (I used 1 Tbsp. parsley and 1 Tbsp. thyme, along with one quick grinding of black pepper. Fyi, the original recipe called for dried rosemary as well, which I chose to omit. The original also called for a total of 1/4 cup dried herbs--I thought that sounded like far too much so I cut the amount in half, and I'm glad I did!)
1/4 to 1/2 tsp. crushed garlic (depending on how much you love the stuff!)
4 Tbsp. unsalted butter, cut into 12 equal chunks


Preheat oven to 450 degrees. Generously grease 12 popover cups or jumbo muffin cups; grease the top of the pan(s) as well. Place each pan on a baking sheet.

In a saucepan, heat the milk until it's just lukewarm, about 110 degrees, then take it off the heat.

Sift the flour, salt, and baking powder into a large mixing bowl.


In the large bowl of your electric mixer, fitted with the wire whisk, beat the eggs on low speed for about 3 minutes, until they look pale and foamy, then add in the warm milk. Add the flour in gradually, still mixing at low speed, then raise the speed to medium and beat for 2 more minutes.

Let the batter rest in its bowl, unrefrigerated, for one hour. While the batter is resting, mix together the parsley, thyme, and pepper in a small bowl, then mix the garlic into the herbs. Grate the cheese and mix that into the bowl as well.

After the batter is done resting, fill each well-greased cup with batter, almost to the top. 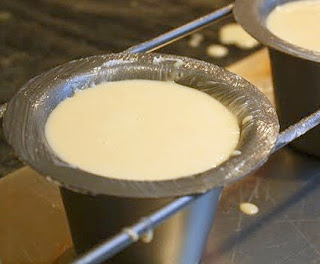 Sprinkle at least one tablespoon of the cheese-herb mixture on top of each one. Plop a chunk of butter on top of that. 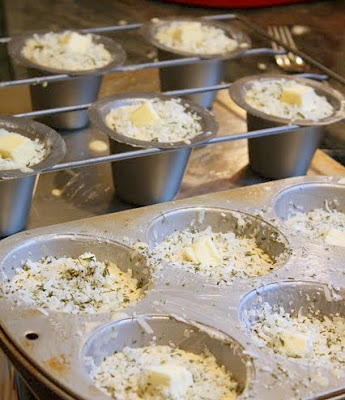 With the pans on baking sheets, place the popovers into the oven and bake for 15 minutes at 450 degrees. Then, turn the oven down to 375 degrees. Bake 30 to 35 minutes longer, or until the popovers look very crispy and are a deep golden brown on the outside. Don't peek at them while they're first baking if you can help it; wait until they've been in there a while. As soon as you take them out, puncture the tops carefully with the tip of a knife; this will allow excess steam to escape and help prevent the insides from becoming soggy.

Best served warm, right after they're made. You can freeze any extras after they're cooled. Reheat them easily, even if frozen, in a warm oven. They'll be almost as good as new. 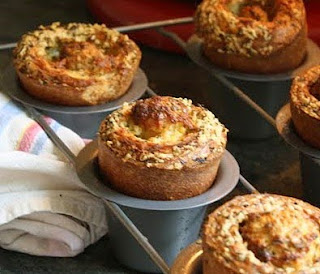 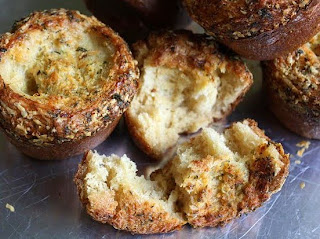 Crispy Outside Creamy Inside Garlic Herb Potatoes - (Free Recipe below)

Peach and Brie Flatbread with Balsamic Glaze - (Free Recipe below)