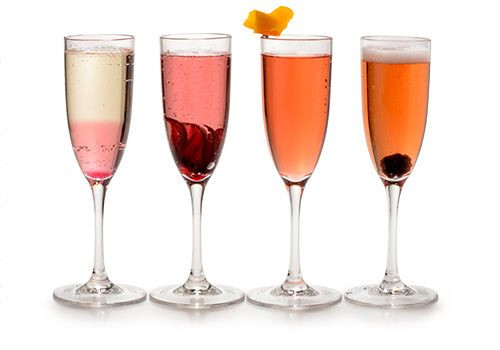 The light flavour and delicate fizz of Prosecco make it an ideal candidate for imaginitive mixing. Try the following blending ideas for sophisticated party drinks...

Prosecco royale
Mix one part crème de cassis with 1 tablespoon of lemon juice and top with three parts prosecco. Skewer a couple of blueberries onto a sprig of thyme and drop into the glass to serve.

Rose-ecco
Invented by Sophie Dahl - fill a glass with Prosecco and pour one tablespoon of rose syrup down the inside of the glass so that it slides to the bottom.

Bakewell Fizz
Place a Kirsch-soaked cherry along with one tablespoon of Kirsch in the bottom of a Champagne flute. Top with one part Amaretto Disaronno and three parts Prosecco.

Hibiscus Prosecco
Put a hibiscus flower (from lakeland.co.uk and some supermarkets) with one teaspoon of its syrup in the bottom of a glass, and pour over Prosecco. Don't discard the flower - it tastes of raspberry and rhubarb.

Christmas pear Prosecco
Decorate the rim of a Champagne flute by dipping it in a saucer of water then into a dish of one tablespoon caster sugar mixed with half a teaspoon of ground cinnamon. Add one tablespoon of ginger syrup from a jar of stem ginger into the glass then top with equal quantities of pear juice and Prosecco, garnish with a slice of stem ginger.

A Sbagliato
A relation of the Negroni - mix four parts Prosecco, one part sweet vermouth (such as Martini Bianco) and one part Campari. Serve with a twist of orange zest.

Raspberry Prosecco Bellini
Pour one part Raspberry liqueur into a champagne flute then add one sprig of fresh basil. Top with four parts Prosecco and serve.

Forager's fizz
A splash of sloe gin and a blackberry or two, topped up with Prosecco.

Prosecco pomander
Combine the juice of one clementine with one part Cointreau and three parts Prosecco in a Champagne glass or tumbler. Garnish with a sprig of rosemary and a slice of clementine studded with cloves.

Prosecco French 77
For a spin on this classic, place one part elderflower cordial, one part lemon juice and one parts gin in a cocktail shaker with ice. Shake until well combined then strain into a tall glass. Top with Prosecco and serve with a twist of lemon and a couple of mint leaves.

1 BOTTLE OF TURMERIC AND BIOTIC BALANCE