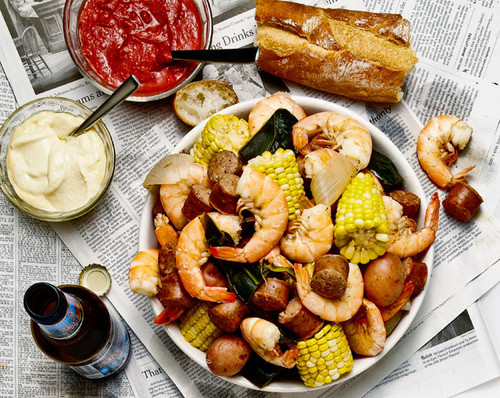 This is an ideal meal for a big crowd at a summer house. You can batch it up or down, depending on the size of the group — don't worry about perfectly portioning each ingredient. It's the cooking time for each ingredient that matters. That, and making sure there's enough beer.

In a large stockpot, combine stock ingredients (squeeze the lemons, adding the juice before you toss in the rinds), including the potatoes (start them in the cold water), and bring to a boil. Lower heat and simmer while you get the sausage, peppers, corn, and shrimp ready.

After the broth has simmered for 20 minutes, test the potatoes for doneness. They should be easily pierced with a knife but not mushy. Using a slotted spoon, spider, or tongs, remove the celery and lemons and discard. Remove the onions and potatoes and place them in a large colander in the sink.

TIP: Do not overcook. The shrimp will become shrimp-colored and float to the surface. That's when you remove them.

Reserve some broth for dipping bread, then pour stew into colander (over the onions and potatoes to rewarm them) and drain well. Transfer to platters and serve on tables covered in clean newspaper, with bowls of broth, cocktail sauce, garlic mayo (recipes below), and warm buttered French bread.

Mince garlic and then mash to a paste with salt. Whisk with egg yolk, dry mustard, vinegar and lemon. Slowly drizzle in oil, whisking vigorously until emulsified.

1 Poor but viable substitute in a pinch: medium potatoes cut into halves or quarters.

—As told to Francine Maroukian