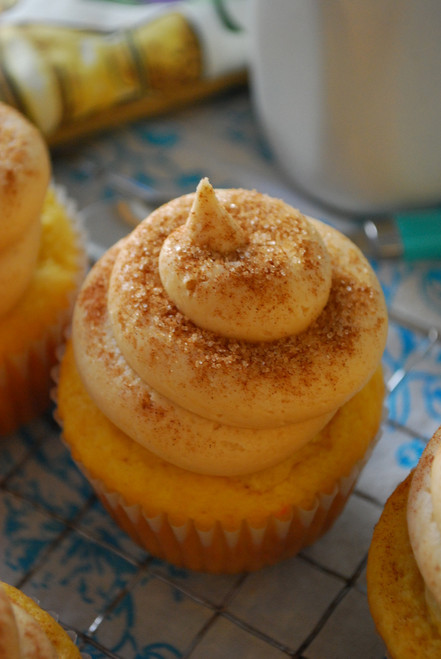 Please contact us for large quantities or special requests.

1. Preheat oven to 350 degrees F. Line a muffin tin with about 20 paper liners.
2. Prepare the cake mix according to package directions. Stir the pudding mix into the batter to combine. Set aside while you prepare the cinnamon rolls.
3. For the rolls, on a clean & flat work space, roll out the crescent roll dough. Press the perforations together to seal and gently stretch it to form a large rectangle; have the longest sides on top and bottom. Brush the rectangle with melted butter and sprinkle the plane of dough liberally with the cinnamon sugar and brown sugar; press the sugars gently into the dough with your palm.
4. Starting at the bottom long end, gently roll the dough into a log shape, mending any holes in the dough as you go. Gently cut the cinnamon roll log in twenty small equal pieces (or as many as you can get out of it).*
5. Drop in a heaping Tablespoon of batter into the bottom of each muffin cup; top with a raw mini cinnamon roll in the middle. Top with remaining batter until the cup is filled about 3/4 full of batter. Bake for approx. 15 minutes or until a toothpick inserted near the center comes out clean. Cool completely while you prepare the frosting.
6. For the frosting, in a large stand mixer, beat together the butter and vanilla until creamy. Gradually add the powdered sugar, about 1 cup at a time, until frosting is light and fluffy. Beat in the cinnamon roll flavor packet and the brown sugar to combine.
7. Pipe the frosting onto the cooled cupcakes. Garnish immediately with cinnamon sugar, if desired. Store airtight at room temperature for one day, or in the fridge airtight for 2 days.