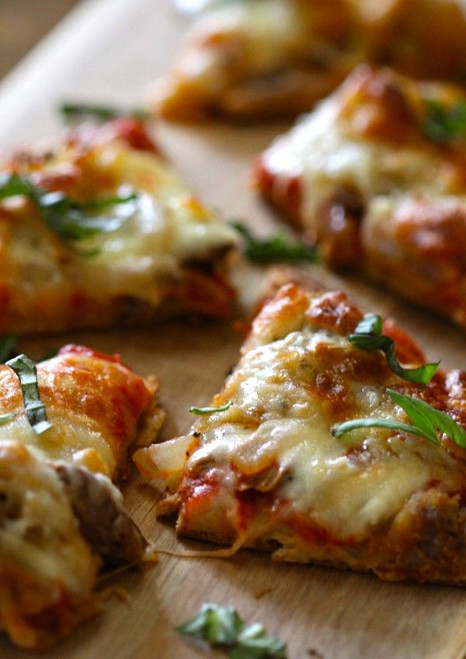 for the pot roast:
Preheat oven to 300 degrees.

In the same Dutch oven, add another tablespoon of olive to the pan. Add onions with some salt and pepper. Saute for a few minutes. Then add the carrots, garlic cloves, and bay leaf. Return the pot roast back to the Dutch oven. Add the wine and beef stock. Bring to a simmer and then turn off heat. Place the Dutch oven in the oven and roast at 300 degrees for 15 minutes. Then turn the heat back to 225 degrees and roast for 3 to 3/12 hours. Remove from oven, place roast on a cutting board and let it rest for about 10 minutes. Once rested, cut the roast into bite size pieces.

to assemble the pizzas: place two whole grain Stonefire Tandoori Naan on a baking sheet lined with foil. Place a 1/2 cup of pizza sauce on each Naan leaving a little room for a border. Next, add pieces of the pot roast. Followed by caramelized onions and a 1/2 cup fontina and mozzarlella cheese between the two slices. Repeat the same process for the other two slices of Naan. Bake in the oven at 400 degrees for 15 minutes or until golden brown. Garnish with fresh basil!

Beef Meatballs in Sauce - per 1 lb

Chicken Meatballs in Sauce - per 1 lb

Production Process Pictures of Italian Tables Being Made