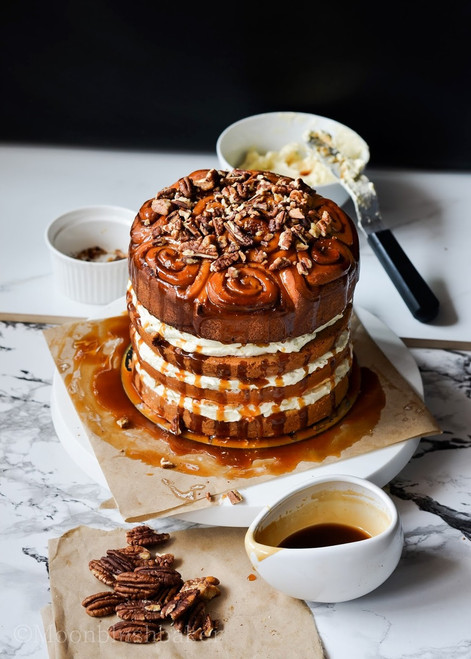 Egg yolk Sponge cake From Daily Delicious
I simply doubled this recipe to fill 4 18cm round cake tins.( left overs are too eat^_^)

Pre heat oven to 190C
Shift your corn flour and cake flour over large bowl twice.
Line your 4 greased 18cm pan with baking paper.
Combine oil and butter in a jug.
In a stand mixer whip the eggs, yolks, sugar and salt until it is triple in size and forms a thick pale ribbon.
Add vanilla and beat again.
Sieve over flour and fold into the egg mix.
Pour butter/oil mix down the side of the bowl in three stages. Fold it in while turning the bowl at the same time.
Pour into your lined pans, try to get them as even as possible.
Once in the oven turn the heat down to 170C and cook for 25-30 minutes or until a skewer comes out clean.
Once fully baked, invert to cool on a wire rack.

In a sauce pan melt caster sugar, brown sugar, syrup over low heat for 6 minutes. Bring to gentle boil for 3 minutes.
Remove from heat source and whisk in thicken cream.
Set sauce aside until needed.

Pre heat oven to 120c. Line two baking trays with baking paper.
In a large bowl whip on high with an electric mixer till soft peaks. On medium speed add your brown sugar one table spoon at time whisking well between each addition.
Place tablespoons of egg mix on trays. Any shape will do.
Bake in oven for 1 hour and half. Turn oven off and leave the door slightly open to finish drying out.

Place on cake at the base of your cake plate. Spread with whipped cream; making a shallow dam in the middle. Pour 50ml of butterscotch in this dam. Crush your brown sugar meringue in large pieces on top the cream and butter scotch. Repeat for all 3 layers.
Place cinnamon roll on the top of the cake (you with have the cream to help it stick)
Transfer to fridge for 30 minutes.
Serves with more butter scotch sauce and top with pecans.

Blushing She Crab Soup with a Twist - (Free Recipe below)