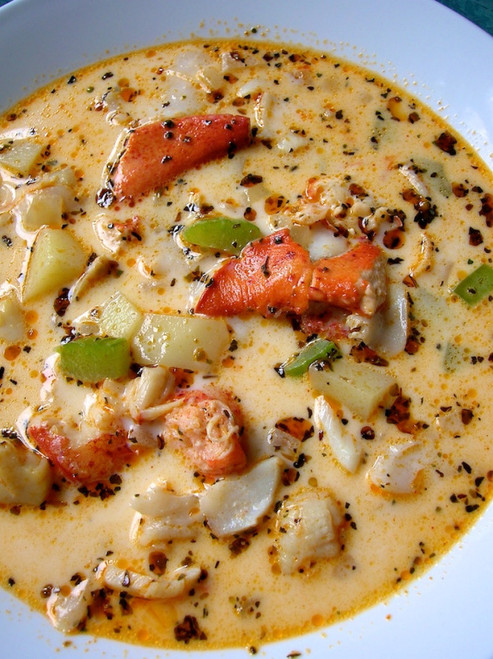 For this recipe, I always use at least a pound of haddock and/or cod, a small package of frozen small-sized scallops and a can of frozen lobster knuckles and claws. The lobster has already been cooked. I think the sweet scallops and lobster really make this chowder.

In a large Dutch oven, melt the butter and then sauté the onions and celery over medium heat – allow them to soften a little – just a few minutes. Add the potato and add only enough chicken broth (or water) to barely cover. Cook until the potato is just barely tender. Add the basil, oregano, celery salt, pepper, salt (if using), paprika and Tabasco sauce. It will seem like a lot of spices, don’t worry.

Layer the fish and shellfish on top. Add just enough chicken broth (or water) to cover. Cook only until fish barely flakes.

Add the cream, and then fill the pot with the milk. If you think you’re going to run out of room in the pot, skimp on the milk, not the cream. My Dutch oven is standard-sized, and there is plenty of room.

Allow the chowder to warm through. Keep on a bare simmer until serving or refrigerate and slowly heat up before serving.

Water is traditionally used in chowders such as this, and will taste just fine if you opt for that instead of broth. If using broth, as I do, I recommend using a sodium reduced variety (I use one of those 900 ml tetra paks) – if you find it’s not enough, you can make up the difference with water. The chicken broth adds just a bit of richness to the chowder.

I find chowder is best on the second day, so when entertaining, make it the day before – it will save you time and stress on the day as well.

After refrigeration, I put the pot on low and allow 45 minutes it to heat through. Do not allow the chowder to boil – low heat is key.

You will notice that the spices seem to sit on top of the chowder, like an oil slick. Don’t worry – when you serve, give a little stir and then scoop – just the right amount of spice will come up with the ladle.